LOA: 29’
BOA: 8’ 6″
Fire Fighting Equipment: Custom, configured to meet operator’s mission requirements
Propulsion: Twin outboards
Metal Shark’s 29 Defiant Fire Rescue is a welded aluminum monohull vessel ideal for fire fighting and emergency response. This highly capable fireboat is based on one of the most proven midsize pilothouse platforms available today, with nearly 500 29 Defiant vessels currently in service worldwide. Like all Metal Sharks, the 29 Defiant may be fully customized to meet virtually any mission requirement. Regardless of configuration and equipment, the 29 Defiant serves as an extremely stable, dependable, highly capable, and surprisingly fast platform that is well suited for both inland and offshore use. 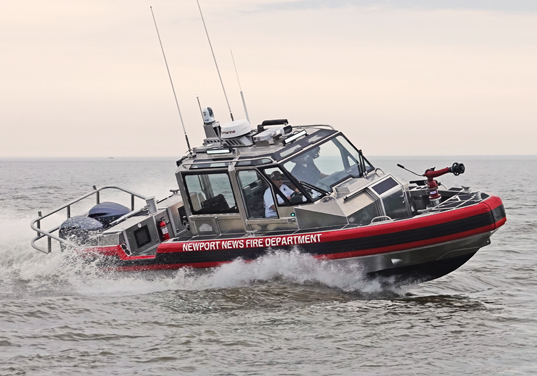 The 29 Defiant features a proven Metal Shark hull design that has been engineered and built to precise tolerances. To achieve its superior hull life rating, the vessel’s hull, deck, and superstructure are composed entirely of heavy, precision-welded plates of corrosion-resistant 5086 aluminum-magnesium alloy. The Defiant-class running surface has been designed for maximum efficiency and performance. This efficiency, combined with the vessel’s durable construction, results in the lowest possible operating cost while at the same time assuring maximum performance. The 29 Defiant is most commonly equipped with twin outboards in the 225HP – 300HP range, and delivers top speeds ranging from 40 to 50+ knots depending on configuration.

The 29 Defiant features an uncluttered, no-nonsense layout designed for crew friendliness. Wide, non-skid walkways feature low-level LED lighting for night missions, and crew members will find hand rails and grab handles within easy reach at all times. A urethane-sheathed closed-cell foam collar provides optimum impact protection during alongiside maneuvers. The 29 Defiant may be configured with an open bow cockpit, or with a closed foredeck with cuddy beneath, and its large aft cockpit workspace easily accommodates backboards, dive tanks and gear, and other equipment. Likewise, the vessel may be configured with a shorter cabin with extended aft cockpit, or a larger cabin with shortened aft cockpit. Shown here are a 29 Defiant open bow with short cabin (Newport News Fire Department) and closed bow standard cabin (Fairfax County Fire and Rescue). 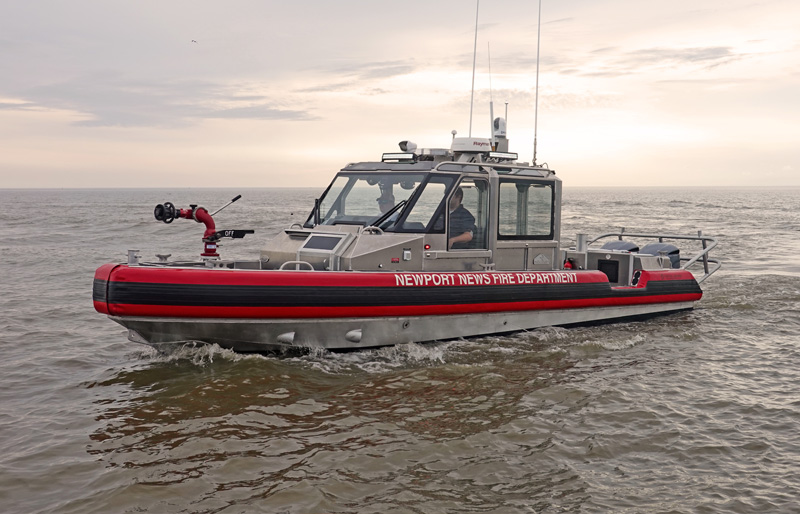 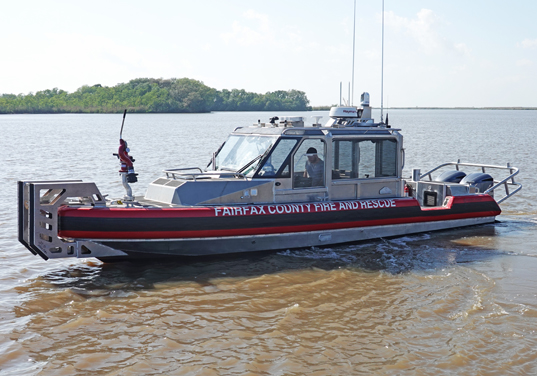 Pilothouse:The most immediately apparent advancement in Metal Shark’s Defiant-class pilothouse design is the use of pillarless glass to substantially enhance visibility. The result is a near elimination of the dangerous blind spots that are an unfortunate drawback of conventional pilothouse vessels which utilize smaller, framed windows. Firefighters appreciate the near 360-degree view from a Metal Shark pilothouse, especially during night missions, while operating in close quarters with other vessels, or during periods of inclement weather or other periods of reduced visibility. 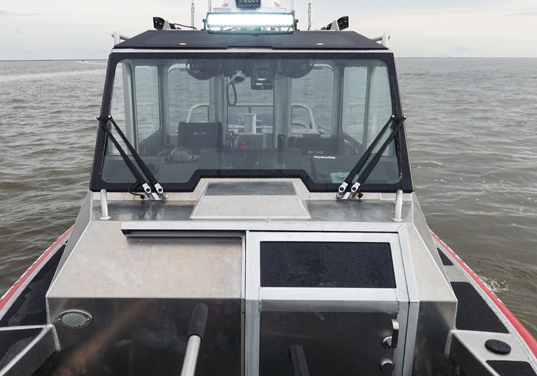 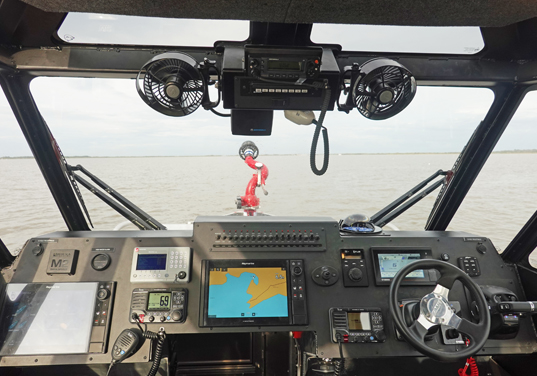 The 29 Defiant is offered in a wide range of configurations to suit various mission requirements. The vessel shown on this page is a 29 Defiant in “Short Cabin” configuration, which offers increased space in the aft cockpit. The Short Cabin can accommodate two shock-mitigating helm seats, and an aft shock mitigating seat to starboard, with a small bench seat on the port side. Meanwhile, the “standard cabin” allows for an extra row of cabin seating, at the expense of a shorter aft cockpit. Depending on agency need and budget, different seating types can be accommodated. Additional available accommodations include AC/heat, and large roll-down cabin windows that allow the cabin to quickly convert to a more “open” arrangement. 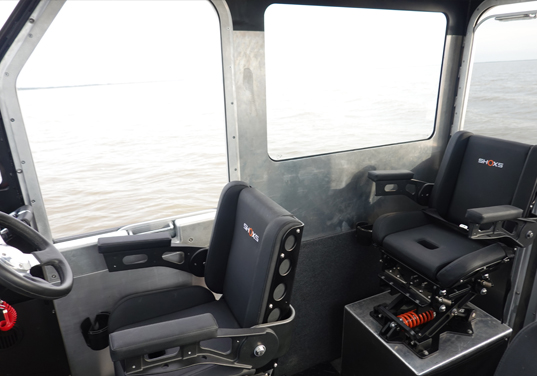 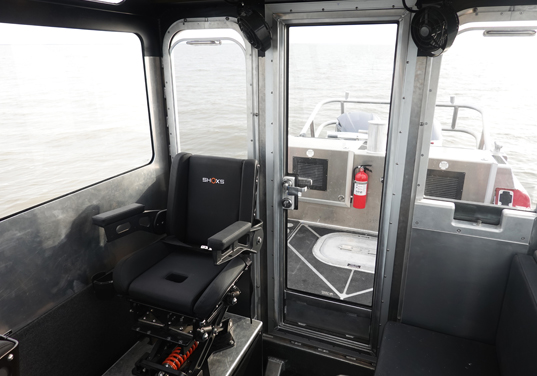 The 29 Defiant “Standard Cabin,” shown here, offers increased pilothouse space at the expense of a shortened aft cabin. The US Coast Guard’s RB-S response boats are built with the standard cabin and shock-mitigating crew seating for five. The vessel shown here, a fireboat built for Fairfax County (VA) Fire and Rescue, features shock-mitigating for three, each with its own console, and supplemental bench/jump seating for a total cabin crew capacity of six. Depending on agency need and budget, different seating types can be accommodated. As with the Short Cabin version, available accommodations include AC/heat, and large roll-down cabin windows that allow the cabin to quickly convert to a more “open” arrangement. 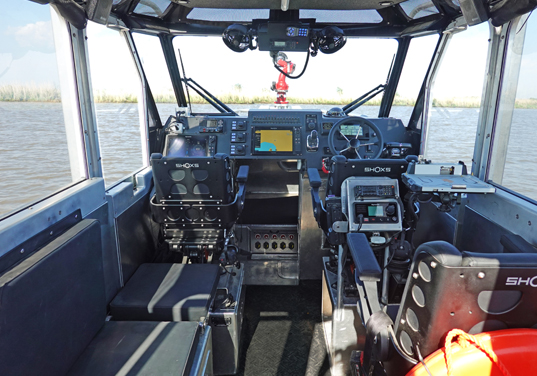 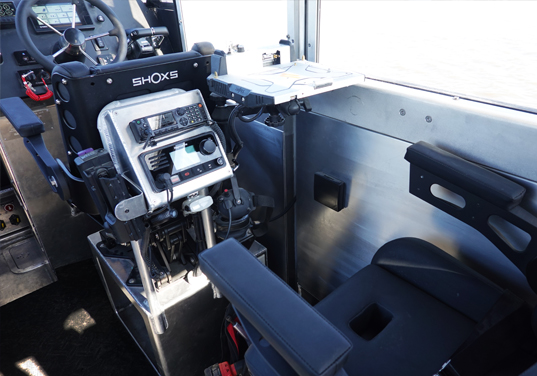 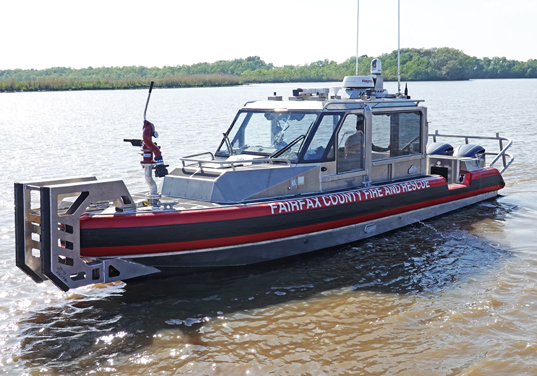 The 29 Defiant may be equipped with a formidable array of tactical firefighting equipment. Shown here is a 29 Defiant fireboat built for Fairfax County Fire and Rescue, with standard cabin, closed bow, and large forward push knee. From fire pumps and monitors to foam reservoirs, hydrant connections, Command and Control communications systems, and positive-pressure Chemical, Radiological, Biological, Nuclear, and high-yield Explosive (CBRNE) crew protection systems, Metal Shark is adept at the seamless integration of firefighting hardware. Contact Metal Shark today to begin the process of building a 29 Defiant Fire Rescue vessel for your agency.