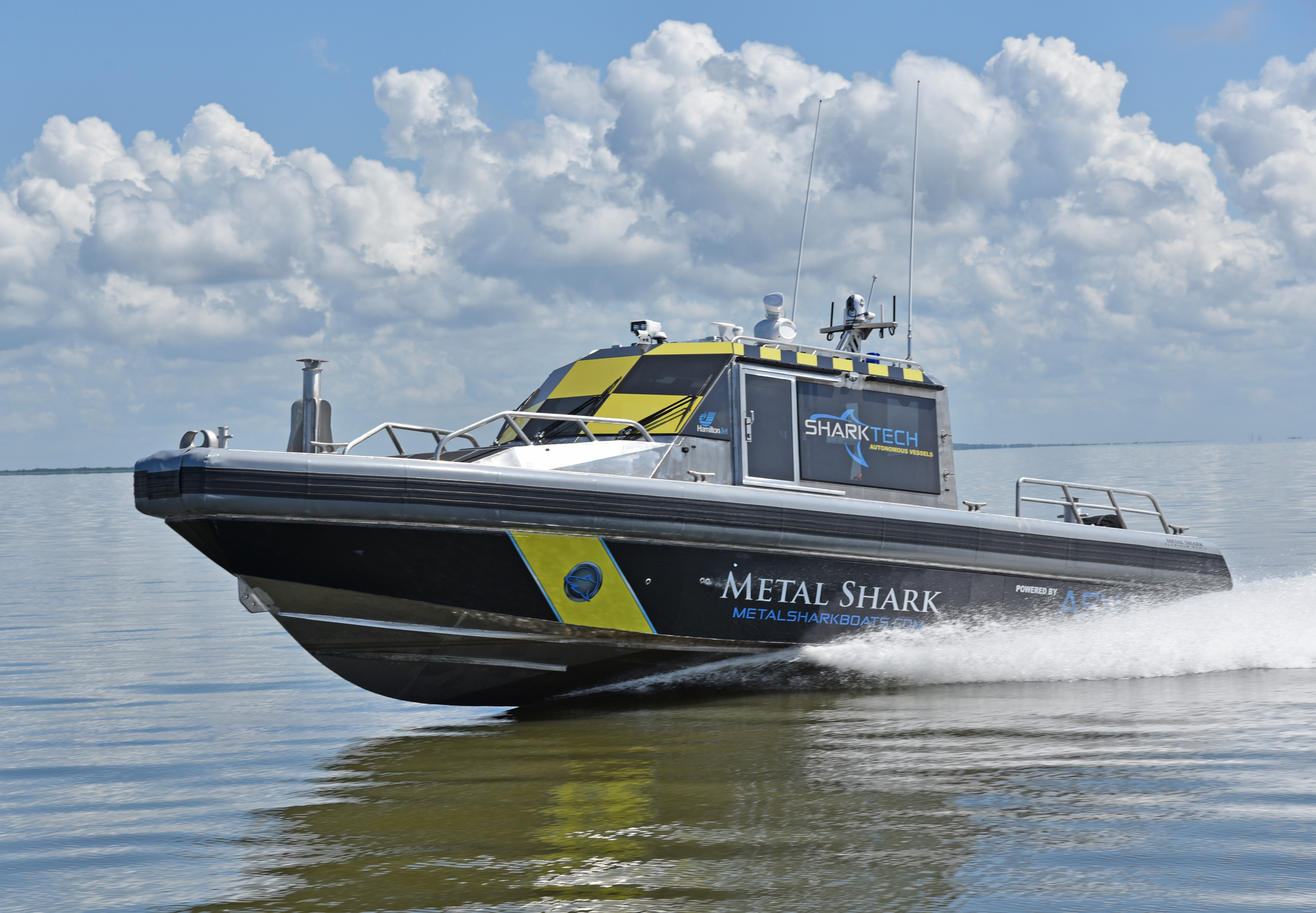 Metal Shark is now offering Sharktech autonomous technology on its entire portfolio of vessels, which range from 16’ to over 300’ in aluminum, steel, and composite. Sharktech autonomous vessels may be custom configured for military, law enforcement, fire rescue, and the full spectrum of applicable commercial markets.

“The industry has watched and waited as autonomous technology has matured from its fledgling stages, and today we’re offering ASV Global’s fully proven autonomous capability on our entire model lineup,” said Metal Shark CEO Chris Allard. “We are demystifying and streamlining the process of autonomous technology integration by bringing this capability to market in turnkey form straight from the OEM. Check the box and get the option, on our full range of globally proven designs.”

“Sharktech autonomous vessel technology opens up myriad opportunities for operators in all sectors,” said Mr. Allard. “Similar to how advancements in aviation technology reduced aircraft cockpit crews, Sharktech offers crew reduction at the flip of a switch. Sharktech is ideal for dangerous missions in remote or hostile environments, for endurance missions where it may be necessary for vessels to loiter in a holding pattern for extended periods, or for any mission simply undesirable for a human crew.”

Sharktech’s ASView system allows for autonomous or remote operation of navigation and safety lighting, hailers and sirens, pumps, and other components. The system also supports the integration and autonomous or remote operation of a near-infinite range of specialized equipment, including fire pumps, monitors, and other fire-fighting equipment; hydrographic survey equipment; equipment for acoustic, oceanographic, or meteorological monitoring; and the full spectrum of FLIRs and other specialty cameras.

“While autonomous technology is perhaps most commonly associated with military applications, its value to commercial operators cannot be overlooked,” said Mr. Allard. “Sharktech’s benefits for safety, crew reduction, endurance, and CONOPS flexibility are unprecedented in our industry, and we are only scratching the surface of its potential applications.”

The vessel’s operations may be monitored from a mother ship via radio link, or from shore via satellite link. In the instance of lost primary and backup communications, the vessel will assume pre-programmed behavior, such as station-keeping. Other safety features include geo-fence tools, emergency-stop buttons, and the ability to switch from autonomous to manual control at any time.

To showcase the new technology, Metal Shark and ASV Global are taking a Sharktech-equipped Metal Shark 38 Defiant patrol boat to the 2018 Multi Agency Craft Conference (MACC) in Baltimore, Maryland for demonstration on July 18th and 19th. The Sharktech demo vessel showcases multiple layers of autonomy, as it also carries a Shearwater aerial drone from Planck Aerosystems that may be launched, flown, and landed autonomously from the moving vessel thanks to an integrated navigation and guidance system.

In order to rapidly meet anticipated demand, Metal Shark has pre-engineered its most popular models for Sharktech autonomous capability, and has also added Sharktech vessels to its Stock Boats program, which utilizes staged hulls and repurposes in-production units to drastically reduce lead times.

“Depending on propulsion and desired equipment, we can currently deliver a fully-autonomous Sharktech-equipped 38 Defiant in as little as 60 days,” said Mr. Allard.

ASV Global is the largest and most experienced actively powered autonomous vessel technology company in the world.  The company and its 150+ employees has delivered more than 100 unmanned systems worldwide supporting the defense, commercial, and scientific sectors.  ASView, ASV Global’s modular open-architecture software and hardware control system, has been in continuous development since 2008 and is optimized specifically for autonomous and remote control of unmanned vessels.  In addition to designing, building, and selling unmanned vessels, ASV Global converts existing manned vessels to optionally unmanned, leases unmanned vessels, integrates client payloads, and provides field support. www.asvglobal.com.