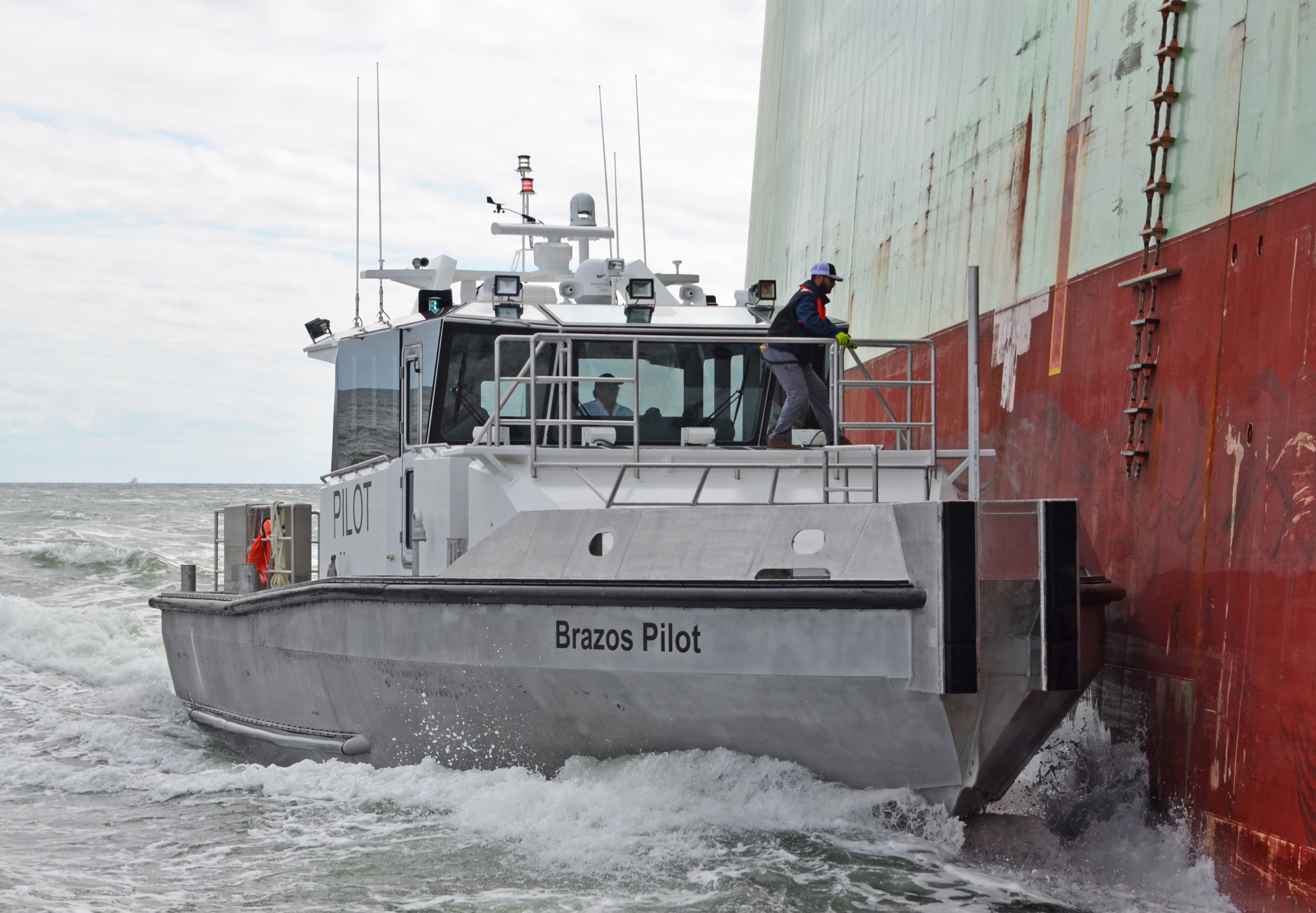 Key operators who rely on the services of Brazos Pilots Association include Dow Chemical, Enterprise, Phillips 66, FLNG, and BP.

Following a christening ceremony on January 31st, the new vessel is now in service.

“The 64 Defiant Pilot employs a very stout, extensively proven deep vee hull for stable operation in heavy seas,” explained Carl Wegener, Metal Shark’s VP of Commercial Sales.”Meanwhile, the decks, pilothouse, and belowdecks spaces are a showcase of modern pilot boat design. The entire vessel has been thoroughly optimized for pilots, with an emphasis on comfort, convenience, efficiency, and safety.”

Like all of Metal Shark’s pilot boat offerings, “Brazos Pilot” was designed by Metal Shark with extensive input from the client to result in a custom tailored vessel ideally suited for its specific mission profile.

In the wheelhouse, shock-mitigating seating has been provided for five crew members, with a footrest, cup holder, gooseneck light, and 110V USB plug at each seating position for comfort and convenience. A settee and table are also provided in the main cabin.

Spacious belowdecks crew quarters are accessed via a stairway in the wheelhouse and a watertight access hatch in the foredeck. Accommodations include a galley area with microwave, coffee maker, refrigerator, and sink; an enclosed head compartment; double-tiered set of lockers for crew storage; and a berthing area with double bunk, drawer storage, and a 4K LED TV with Blu Ray player and KVH TracVision TV3 satellite television system. From the counter tops to ceiling panels and flooring, modern finishes are used to create a bright and airy, comfortable atmosphere for crews onboard for extended periods.

Outside, the 64 Defiant Pilot’s fully flush non-skid decks allow for unimpeded access around the vessel, and hand rails have been placed for easy reach at all times. Low-level LED pathway lighting enhances safety during nighttime operation.

To meet the client’s requirements, a large pilot transfer platform was engineered into the vessel’s foredeck, with a wide, integrated non-skid stairway and specially-configured safety rails.

“Our in-house engineering team works directly with clients to assure that custom features are incorporated at the design stage and not as an afterthought,” said Mr. Wegener. “An example of this is the careful consideration given to the design and integration of the pilot transfer platform to minimize any obstruction to visibility.”

To facilitate operation in close quarters, the vessel has been outfitted with a secondary control station on the aft deck, equipped with steering and throttle controls and a set of digital displays, which allow the operator to monitor engine performance while controlling the vessel from this station.

“This is an extremely efficient hull that surpassed the requirements for the Brazos Pilots and could easily accommodate more power if required to meet the mission profiles of other pilot groups,” said Mr. Wegener. “This new and modern design delivers significant improvements to pilots, in terms of crew safety, comfort, and efficiency and serves as a shining example of the advantages a custom Metal Shark pilot boat can bring to pilots everywhere.”