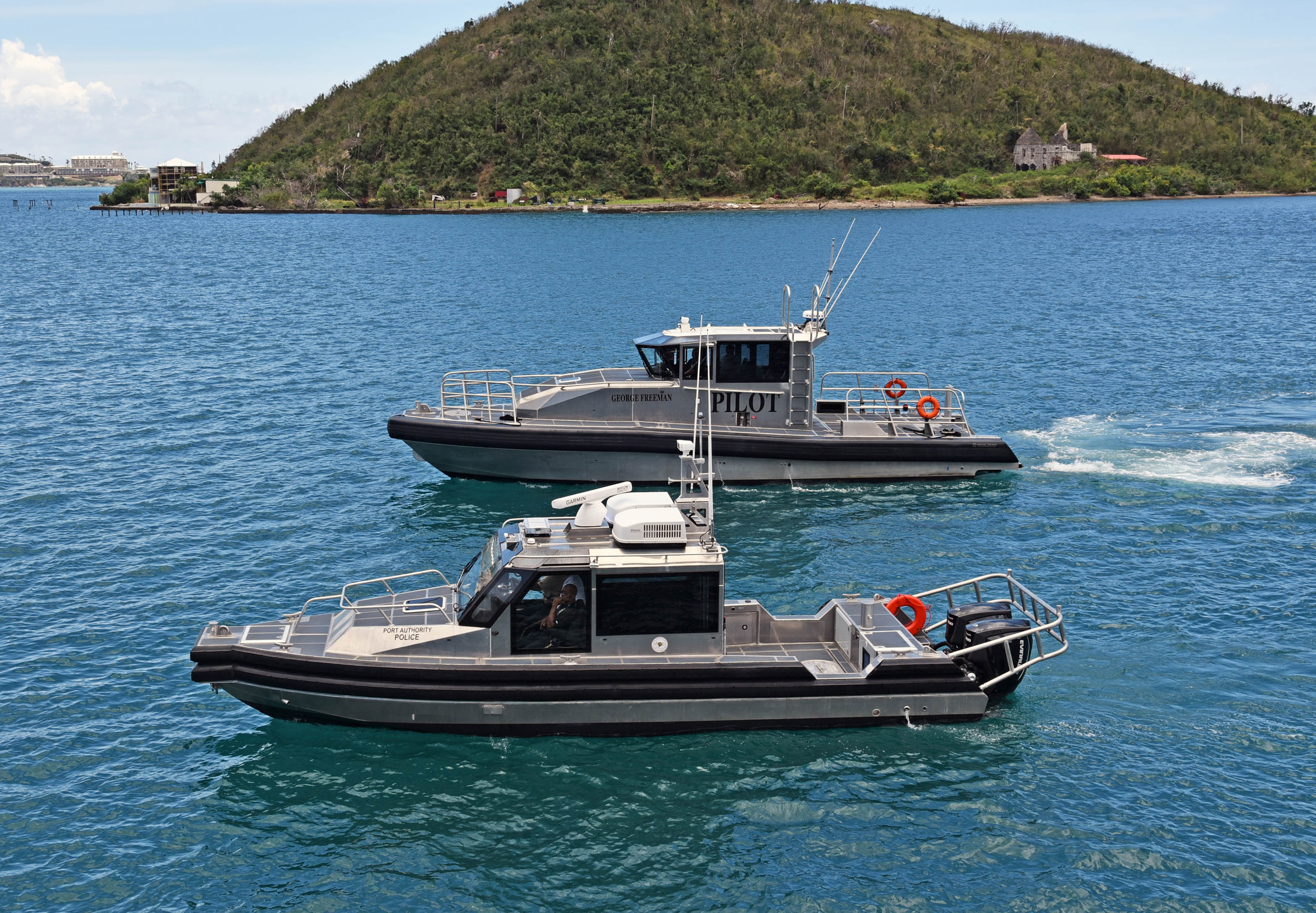 The vessels, designed by Metal Shark and built at the company’s Jeanerette, Louisiana production facility, were recently delivered to St. Thomas and transferred to VIPA. Both vessels are now operating from the Edward Wilmoth Blyden IV Marine Facility on the Charlotte Amalie waterfront where they serve the island of St. Thomas and also nearby St. John.

The new pilot boat is a 45-foot Defiant-class monohull pilothouse vessel with a military-proven hull design and a unique deck arrangement specifically designed for pilot operations.

Fully flush non-skid decks allow for unimpeded access around the vessel, and hand rails have been placed within easy reach of all crew, inside the cabin and outside on deck, at all times. Low-level LED pathway lighting enhances safety during nighttime operation. The vessel’s large, functional swim platform, plus easily accessible Jason’s Cradle, dive ladder, and throwable life rings, are intended to assure quick and safe crew retrieval in the event of a man overboard situation.

Powered by twin Cummins Marine QSM11 diesel engines coupled with Hamilton HJ322 waterjets, the 45 Defiant Pilot demonstrates pinpoint maneuverability while delivering a cruise speed in excess of 30 knots and a top speed in the 40 knot range. A urethane-sheathed, closed-cell foam Wing collar provides durable and resilient fendering. Shock-mitigating seating has been provided for a crew of five, and anti-fatigue floor covering has been provided in the pilothouse and the belowdecks crew spaces. Additional features include a galley, enclosed head compartment, v-berth, and large walk-in mid-cabin storage compartment.

VIPA has named its new pilot boat the “George Freeman” in honor of its first coxswain, George Elwin Freeman Sr., who worked for VIPA for 33 years until his passing in 2000.

Funded in part by a FEMA Port Security Grant, the vessel has been outfitted with a postivie-pressure Chemical, Biological, Radiological, Nuclear, and high-yield Explosive (CBRNE) crew protection system to assure safe and uninterrupted operation in a wide range of disaster response scenarios.

“Metal Shark has expanded into the pilot boat market by applying the same principles that made us so successful in the military patrol boat sector,” explained Metal Shark’s CEO Chris Allard. “We start with a proven hull design to deliver a boat that performs well and is built to last. Beyond that, we focus on offering genuine improvements by incorporating modern features into smarter and more user friendly arrangements that simply work better than what’s out there. We continue to gain customers in new markets by delivering improved platforms that deliver tangible and sometimes unexpected benefits to operators.”

“Both of these vessels offer significant imrpovements over the boats they’re replacing, in terms of crew safety, comfort, and efficiency,and port operations will undoubtedly be enhanced as a result of these acquisitions,” said Carl Wegener, Metal Shark’s Vice President of Commercial Sales. “With additional pilot boats now in production, we look forward to demonstrating to pilots and port operators everywhere the many advantages a custom Metal Shark pilot boat can bring to their organizations.”