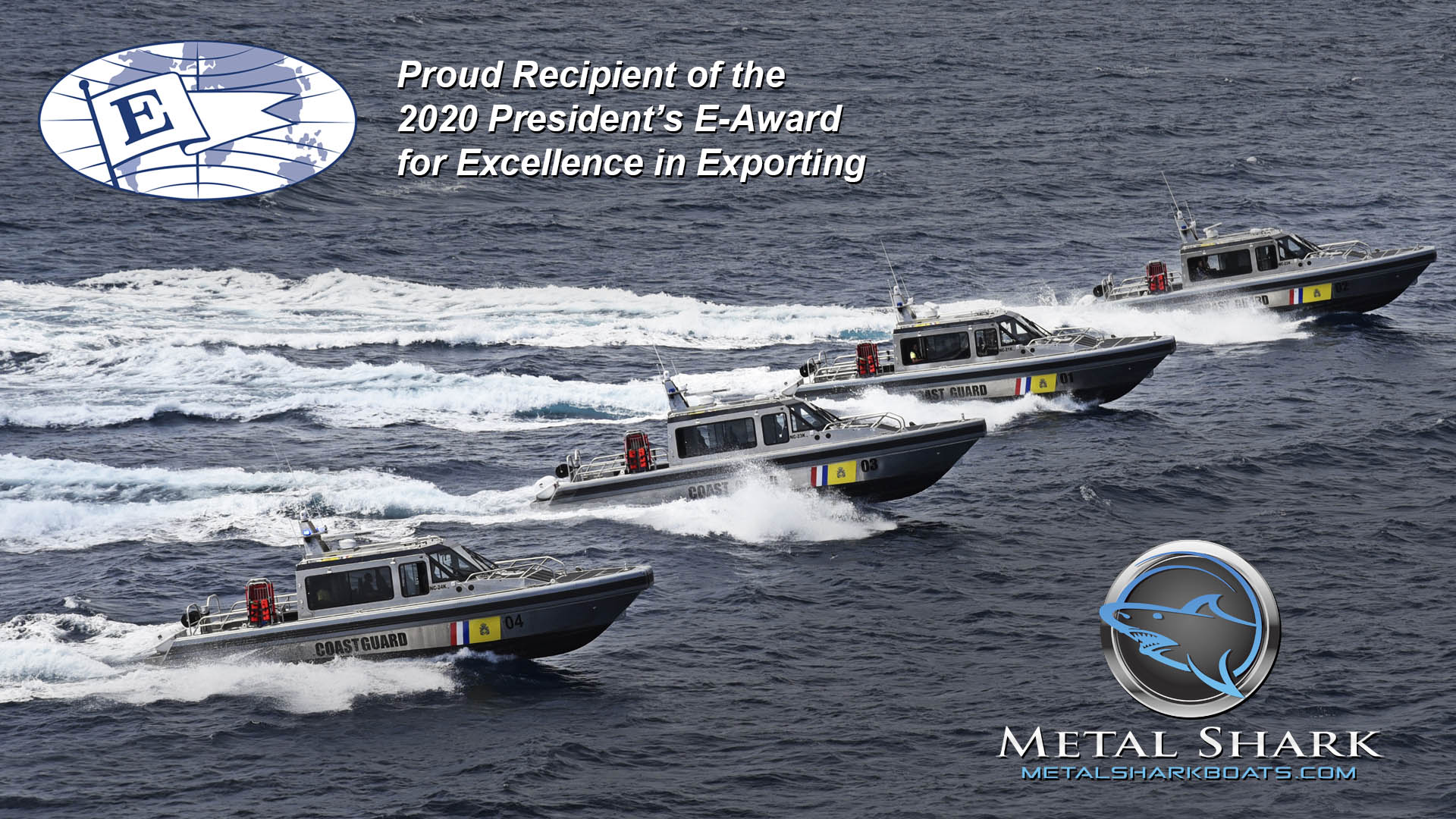 Jeanerette, LA – November 4th, 2020: Louisiana-based shipbuilder Metal Shark has been selected to receive the President’s “E” Award for Exports. The company was recently notified by U.S. Secretary of Commerce Wilbur Ross. The President’s “E” Award is the highest recognition any U.S. entity can receive for making a significant contribution to the expansion of U.S. exports.

“Metal Shark’s achievements have undoubtedly contributed to national export expansion efforts that support the U.S. economy and create American jobs. The ‘E’ Awards Committee was very impressed with Metal Shark’s phenomenal growth in export sales over the past four years,” said Secretary Ross in his congratulatory letter to the company announcing its selection.

“We are highly focused on our export business and place great emphasis on supporting our growing list of international customers,” said Metal Shark CEO Chris Allard. “Operators across the full spectrum of government, military, and commercial markets appreciate the assurance of dealing with a well-proven, reliable builder in the United States, and we strive to meet their needs with high-quality product. It is an honor to be recognized for our success with the President’s “E” Award.”

“We would like to thank Secretary Ross for recognizing Metal Shark as one of the top U.S. exporters,” said Henry Irizarry, Metal Shark’s Vice President of International Business Development. “We establish and maintain long term relationships with our customers worldwide by delivering next generation, mission-configured platforms of the highest quality, and providing unmatched service and support.”

“Through innovation, tenacious salesmanship, and a comprehensive focus on customer satisfaction, Metal Shark delivers flawlessly to buyers worldwide. That is how U.S. businesses compete and win every day in global markets. My team and our colleagues overseas are proud to support them,” said Erin Butler, Director of the U.S. Commercial Service New Orleans, which nominated Metal Shark.

In total, Secretary Ross honored 39 U.S. companies and organizations from across the country with the President’s “E” Award for their role in strengthening the U.S. economy by sharing American ingenuity outside of our borders.

U.S. companies are nominated for the “E” Awards through the U.S. Commercial Service, part of the Department’s International Trade Administration. With offices across the United States and in embassies and consulates around the world, the International Trade Administration lends its expertise at every stage of the exporting process by promoting and facilitating exports and investment into the United States; administering Anti-Dumping and Countervailing Duties orders; and removing, reducing, or preventing foreign trade barriers.

About the “E” Awards: In 1961, President Kennedy signed an executive order reviving the World War II “E” symbol of excellence to honor and provide recognition to America’s exporters. Criteria for the award is based on four years of successive export growth in one or more international markets. For more information about the “E” Awards and the benefits of exporting, visit www.export.gov.